Last night, Ubaldo Jimenez and the Rockies dominated the Diamondbacks, 12-1.
“He’s one of the most dominating pitchers in baseball right now,” Gonzalez said. 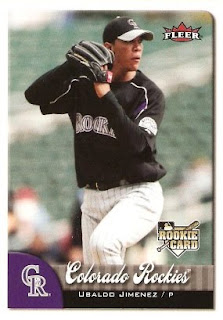 Damn right, CarGo. Ubaldo has now gone 22.3 innings pitched without...can you guess? Giving up and earned run. Yeah. It's the longest streak in Colorado's franchise history. It's safe to say that this guy is a special talent. Not convinced? Check this out, then.

But Ubaldo is not the only National leaguer embarassing opposing lineups this season.

Roy Halladay has been nails for Killadelphia, as everyone knew he would be, going 4-1 with a 1.80 ERA and an unbelievable 11:1 K:BB ratio. Yeah. Eleven to one. And oh yeah, he's not a strikeout pitcher. 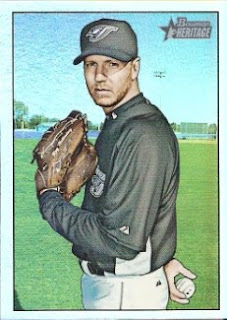 So far this year we've Philip Hughes, Ricky Romero, Shaun Marcum and others take no-hitters into the eight inning. Ubaldo has a one-up on others in the NL Cy Young race (maybe the hardest award to win in the Bigs?) with his accomplishment versus the Braves recently.

So who's your pick? Tiny Tim? The Good Doctor? Or Big 0-fer Ubaldo?

Either way, it's going to be a great season to witness some of the best pitchers in baseball...history.
Posted by Roy at 9:51 AM No comments:

This is what happens when I watch Hockey instead of Baseball 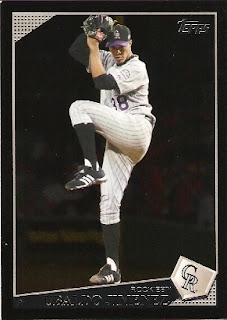 ...and the goddamned Caps won, too.

My man Ubaldo (a guy I collect, hint) tossed a no-hitter today. He also walked six, so it was afar from perfect.
Posted by Roy at 8:28 PM 1 comment:

Hey gang. We're a family here, and I wanted to let you guys know of something fishy going on.

This morning I received an email from "John."

John claimed to be affiliated with a company interested on buying ad space, a simple text link, on this blog.

Of course, I was skeptical. So I looked into it more.

The sender's email is "john@missionclear.net."

Red Flag #1 - Why would this supposedly global corporation (On the cutting edge of advertising!) with over 100 employees have ONE "John", the most common name I know of?

Red Flag #2 - If you're going to scam someone, make your website look less like something I created my senior year of high school in Marketing & Web Design class. Here's MissionClear's steaming pile of shit website.

Red Flag #3 - More often than not, a large company will have complex webaddresses, rather than Xcompany.com/page.whatev . It's a security thing, I believe.

So I did a little research. Before I could finish typing "missioncle.." into google, the dropdown menu had one suggestion: "MissionClear Scam". Well, that was easy.

I looked into it a bit more, and what they do is ask to pay you up front for ad space, rather than as a rate. Then, they ask you to cash a certified check for too much and send them a refund. Of course, this check bounces, and you're left with(out) whatever you send them. So, you know, don't bother with these parasites.
Posted by Roy at 8:54 AM 16 comments: 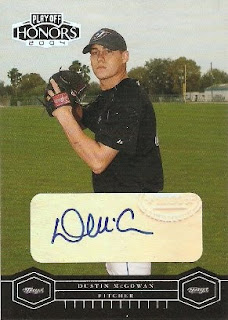 I don't think I mention it enough. At least, there is no specific page on the subject (until now) on this blog. So I have decided to chronicle the chase of my favorite player, Blue Jays starting/injured pitcher, Dustin McGowan.

We'll descend through the years, rather than ascend. At this bottom, eventually, I will post a want list of Dustin's cards, along with a few posts here and there on my most wanteds.

Spring is usually a busy time for me, so I'm used to mailing in on my hobbies this time of year. In high school all I knew in spring time was pitching (I sure as hell couldn't hit until summer). I didn't care about my academics then, and until I got my lovely dogger, I didn't have much else to care about then.

In college, well, the first four years, anyway; I spent all of my time doing geology (as the field season kicks off, it is rather impossible to find a geologist indoors), as well as playing (both) indoor and outdoor soccer at to different schools for three different teams, along with pickup wiffle, softball and hockey games.

Now that I am out of college I thought I'd be more prone to outdoor activities such as fishing and running and rock hounding. But with fishing season not open until May, running without the fear of having to remove a four-banger Ford from my rectal cavity, and rock hounding impossible to schedule while trying to get everyone involved, I have pretty much succumbed to substitute teaching and watching Frazier on Lifetime from 10-11 every morning.

I meant for this to be a quick post, but it wasn't. Sorry. Here's what (I guess?) I was leading up to. 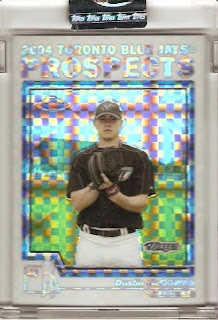 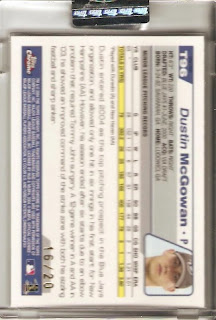 This is my new lowest numbered card. That's right, I have no 1/1s, nor do I intend to chase any gimmicks such as printing plates, unless they're Dustin McGowan.

Another first as of late is this one: 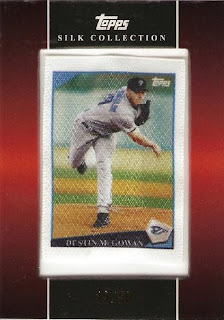 Another first. A guy at work in AUGUST told me about pulling a silk from '09 Topps. I played along like I gave a shit/knew what they were. Now I have one, and, to an extent, appreciate them. I have no interest in them other than getting any McGowan, Marcum or Romero, really. They're a nice idea, but they should stick to The Flagship, and stay the hell out of my Ginter. By the way, 2010 Topps Allen & Ginter's and 2009-2010 UD Champs are the only sets I plan on collecting this year. And since almost everyone wants to collect A&G this year, I believe it should be easy for everyone to do so with box breaks, trades, and genuine blogger generosity.

Aaaand that's it, I guess. More McGowans later this week. I have found a great ebay seller who sent me a nice email saying he's got a bunch of him and a bunch of Jays and he'll list 'em for me if I want 'em. Refreshing to find an ebay seller who would rather have your business repeatedly than just rail you in the ass with shipping.
Posted by Roy at 3:09 PM No comments:


Yesterday, in the draggin-ons of the Upstate NY evenings (though, a very pleasant one), the girlfriend thought up the idear to head to Target in Cicero. Sounds good, I thought. I hadn't bought cards in over a month (I think).

So we saddled up, and went to Target.

Interestingly, I may have caught some pack searching in progress, along with the dopes young kid, of course. (Why do they always bring the kids to show off their scum.) However, I was in no place to scold this man, as he did not purchase anything and left quickly after I showed up. Not to mention the credibility I would have lacked whence the searcher noticed the $.75 pair of women's underwear I was grasping as m'lady was visiting the bathroom. Such as it goes.

Anyways. The guys and his kid left, and I looked over the paltry selection of cards during the dead time between key releases.

Then, in the blasters, this ugly guy staring back at me: 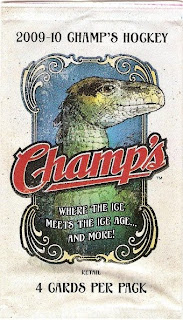 On cardboard, of course. But still, very cool packs. I was actually pumped to see that there were only two blasters remaining, and only six packs left out of the 24 from a retail box. This means somebodies buying these, and damn well they should be. Here's why... 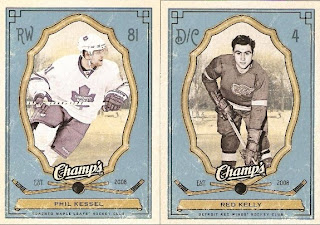 Excellent base set. Pretty simple design, very hockey design. Those who follow hockey cards will know what I mean.

I really enjoy the parallels. I pulled 5, even though the box of 12 packs states parallels at 1:4, so I made out big time there. First, "green", or as I like to called them - Seafoam.

I didn't realize the seafoams were parallels until I had them all stacked up at the end and Craiggy was sticking out.

Love the yellow. These are apparently one-per-box, or 1:24 as far as I can tell. So this Havlat is kind of a hit for a blaster. 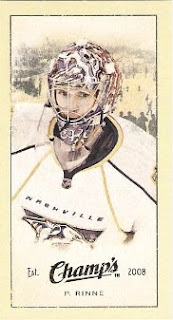 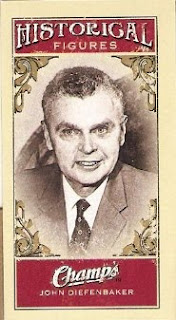 Historical Figures. I could do without these. 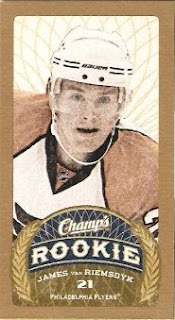 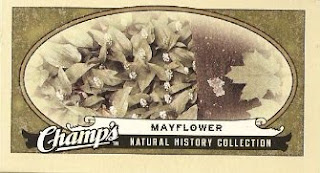 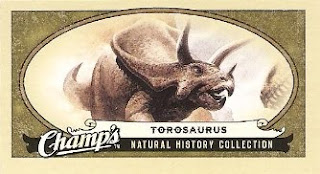 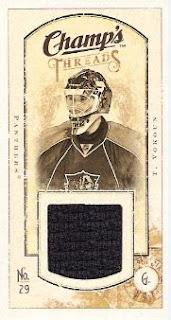 ...and Mini Threads! Mini-Jo! This was a pleasant surprise. I was pumped, even though it's Tomas Vokoun. Anyways, this is an absolutely perfectly done relic. Tiny swatch? Throw it on a tiny card! Sepia-tone that shit! Give it a cool name like Threads! Great cards...mediocre player selection on these.

Overall, this is THE BEST blaster I have EVER purchased. Now, I rarely buy hobby boxes, and spend the most of my cash on blasters, so I buy a lot of them. The real cool thing is that this is the first memorabilia hit I have ever landed from a blaster in which one is not guaranteed. So, yeah. Go snatch some of these up, whether through loose packs, blasters or a hobby fatty. These are well worth the money, and 100x greater than their Goodwin Champions counterparts.
Posted by Roy at 1:11 PM No comments:

It will be interesting to see the route the Red Sox will take tonight versus the Evil Empire (or route, I haven't seen any lineups, yet.) Beltre was one of three big signings for BoTown this winter along with Scoots and Lackey, and I am willing to bet he'll improve, albeit marginally in his batting number this season upon moving from the "pitching haven" of SafeCo field.

But he won't improve tonight. Nah, the guy's 1-13 (.077) versus Captain Cheeseburger in his career. This is where baseball's huge money ego comes in. Beltre will start, I'm sure, with Mike Lowell sitting on the bench. Imagine the press it would get if a big free agent signing sits on Opening Day with an aging, balky third basemen (who, in reality IS THE BETTER PLAYER) actually plays.

...and it does not surprise me. While jumping around eBay a few minutes ago, I decided to see if any 2009 Topps 206 Carolina Brights had hit ebay within the past who knows when. 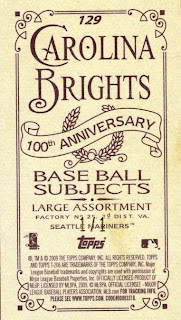 All the back of the card preludes to is a Mariners player, and card #129. Well here's the from, too: 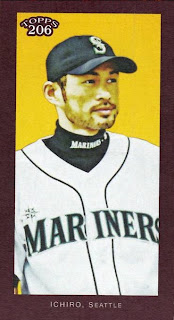 Glorious. I'm not a big fan of foil on my 206's, but I haven't pulled a Carolina Brights, and , well, I don't plan on it I would love to acquire one eventually, hopefully a Halladay or Rookie Romero (life=complete), but finding that one person on the planet with that card, and then matching their price, I am sure is near impossible.

So if you're feeling frisky and want to blow a good amount of bills (I'm guessing this goes for $300 or so), give this guy a bid.
Posted by Roy at 7:27 AM No comments: 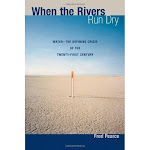